Just added to your cart

What Fast Fashion Really Costs You.

What is Fast Fashion?

You’ve probably heard this term in the sustainability community, but what makes a particular brand or style fall under the remit of fast-fashion? It’s not just high-street styles or heavily discounted online retailers - Fast fashion is a manufacturing method focused on rapidly producing high volumes of clothing, typically replicating styles of high-end designers for a much lower cost by cutting corners on material and labour costs.

Not only does this result in poor working and living conditions for garment workers in developing countries (which is a whole blog post on its own!) but it also has a huge environmental impact. The fact is, the CEO’s of these big fashion brands are totally obsessed with the bottom line. They’ve no interest in the ethics of how they make their fortune.

Once upon a time there were only 4 seasons in the fashion world, and most of the time they were grouped into two: Spring/Summer and Autumn/Winter. Today, fashion retailers have broken the year down into 52 “micro-seasons”, with a new collection releasing each week. Having worked in the High-Street retail world myself, I can attest to the fact that there were two deliveries of clothes a week, sometime more during Christmas and sale seasons. If lines didn’t sell within a certain time, they were pulled from the floor, boxed up and sent off - to what I was told, a charity in the U.K.

It’s debatable as to whether or not  consumers created the high demand for these mass-produced clothing lines, or whether it has come from the top down- with clever marketing strategies to make the consumer believe they needed more merchandise.

In the 1940’s, the average American woman had 9 dresses, 4 pairs of shoes, and two coats. Clothes would be carefully cleaned and pressed, shoes were resoled and polished. By the 1970’s, 10+ new garments were purchased annually. People were looking for clothing that expressed their individuality, however the oil-crisis led to a major recession. This ultimately led to the demand for quick and inexpensive clothing that could keep up with the diverse societal groups, from punks to hippies. Cheap knock-offs of designer brands started appearing on the market, made from polyester and rayon. Today, the average person buys 70 new garments a year.

What is the problem with Fast Fashion?

The issue with having such high demand and enormous turnover is that in order to produce this volume of clothing, manufacturers are cutting corners somewhere, if not everywhere. Workers are exploited, fabrics are produced synthetically using plastics and chemical processes, and quality control goes out the window. There is nobody checking if that hem is sewn straight or that the buttons are all there. Consumers won’t pick up a defective item and it’s cheaper for the shops to toss it than have it repaired. The “good” items that do go home with shoppers don’t have the longevity that clothing used to, and typically fails after only a couple of wears. The item goes to landfill and the consumer hits the high street to get a new replacement.

It would be foolish to think of these items as being “cheap”. Fast-Fashion labels earn millions, and sometimes billions, of dollars each year based on the sheer volume of units sold, regardless of what the profit margin is and regardless of who they have to step on to reach those profits. Lucy Siegel summed it up perfectly in the documentary “The True Cost”, when she said “Fast fashion isn’t free. Someone, somewhere is paying.” (This is a fantastic documentary by the way and I would recommend it. Its available to stream on Amazon Prime or you can purchase the DVD here). 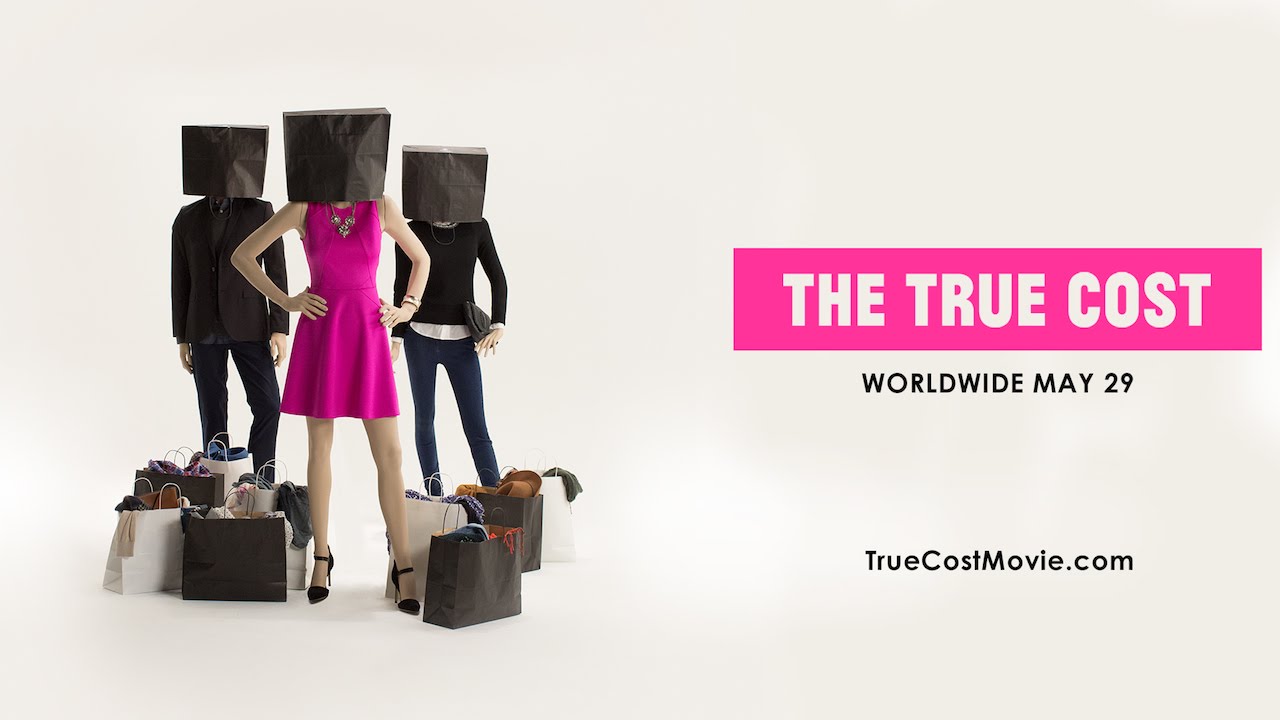 It may surprise you that the fashion industry is the second largest polluter in the world, after the oil industry.

In many cases, untreated toxic wastewaters from textiles factories are dumped directly into the water supply of the countries where the clothing is being produced. These waste waters include toxins such as lead, mercury, and even arsenic. They are extremely harmful for the local wildlife, let alone the millions people living in these regions who rely on rivers as a source of drinking and bathing water. This contamination eventually reaches the sea and spreads around the globe. Even when choosing natural materials, such as cotton, unless they are labelled as organic, the use of fertilisers is a major contributor to water contamination.

There is also a huge reliance on water for dying clothes. It can take 200 tons of fresh water to dye 1 ton of clothing. Up to 20,000 tons of water is required just to grow 1kg of cotton.

85 % of the daily needs in water of the entire population of India would be covered by the water used to grow cotton in the country.
100 million people in India do not have access to drinking water.
— Stephen Leahy, The Guardian

You can combat this by choosing to buy fabrics with lower water consumption, such as linen or recycled fabrics.

Chemicals are used throughout the production of our clothing, from the fertilisation of natural fibre crops, to the bleaching, dying and wetting of the textile. Chemical fertilisers have been linked to the premature deaths of farmers. Garment workers have repeatedly been exposed to benzothiazole, which has been linked to several types of cancer and respiratory conditions. These chemicals can remain in the fibres of our clothes and can even cause health problems for the consumer. Our skin is our largest organ, and we should be concerned with what we choose to expose it to.

You can not only help yourself, but send a message to manufacturers that you do not want chemicals in your clothes, by choosing to buy organic materials, and by shopping with brands that are sustainable (just watch out for green washing!). You can also look out for fabrics with sustainable certifications, like Tencel.

The apparel industry is accountable for 10% of all global emissions. This is largely due to the energy required to make the fabrics, run the sewing machines and transport clothing across the globe. Synthetic fibres (viscose, polyester, nylon, etc.) which can be found in the majority of clothes are actually made from fossil fuels, which makes their production more energy intensive than natural fibres.

In the 1960’s, 95% of clothing purchased by Americans was made in America. Today, only 3% of clothing purchased in the USA is made there. The other 97% is imported from across the globe, mainly china, and Bangladesh. These clothes have a much larger carbon footprint as they have to be flown or sailed from one side of the planet to the other.

In most cases, our clothing is produced in countries which are largely powered by the burning of coal, one of the dirtiest fuels you can burn. Coal combustion plays a significant source of nitrous oxide, a greenhouse gas that is 300 times more damaging to the earth than CO2.

The best way to limit greenhouse gas involvement in your clothes is to shop from brands who produce their clothing in countries that don’t rely on coal as a source of power, to buy natural fibre clothing, or to mend the clothing you already have.

When you can buy a T-shirt in a shop for €2, you cannot deny that clothing has become disposable. The average American tosses 82lbs of textile waste each year. This waste is largely synthetic and takes over 200 years to degrade in Landfill. Only 15% of post-consumer textile waste in the Western World gets recycled or donated.

You can do you bit by choosing to shop secondhand. There are so many great apps out there, like depop, vinted, or thriftify where you can shop second hand from home. Hit up your local vintage store and charity shops. And when you no longer reach for that Jumper, list it on one of these apps (you might even get a few quid for it!), drop it into your local charity shop, or leave it at a clothes bank.

Microfibres in your laundry

Every time you wash a synthetic item of clothing, it releases up to 1,900 microfibres into the water system. These microfibres make their way into the diets of tiny aquatic lifeforms, which are consumed by bigger and bigger fish, all the way up the food chain, until they end up on our plates. Even if you’re a vegan, you can still ingest them as plastic microfibres have been found in vegetables that have absorbed them through the water system. I'm a divil for a fleece myself, which is responsible for 1.7g of microfibres to be released with every wash.

There are a handful of ways, that when implemented successfully, can reduce microfibres from entering the water systems, starting with choosing natural fibres with similar qualities, such as wool or cotton. The synthetic clothing you do own should be laundered as little as possible, washed on a low setting and line dried, as excessive heat has been found to release the fibres easier. For clothing where a natural fabric isn’t an option, there are a couple of options made from recycled plastics, like this sports wear from the Girlfriend Collective (Which I actually own a couple of items and they’re awesome!) or this outdoor wear from Craghoppers.

The Guppyfriend bags were invented by two German surfers, and is designed to catch 86% of microfibres as you wash you synthetic materials. You can then dispose of them responsibly.

The best thing you can do for the environment, when it comes to your wardrobe, is to love the items you already own. Mend them, wash in delicates bags, resole shoes and condition your leather. I like to operate (or at least try to!) a “One In, One Out” policy, whereby I can’t buy that new pair of jeans until the pair in my wardrobe are no longer wearable. When you do buy new clothes, try shop second hand or with brands that have a transparent sustainability and ethical policy. 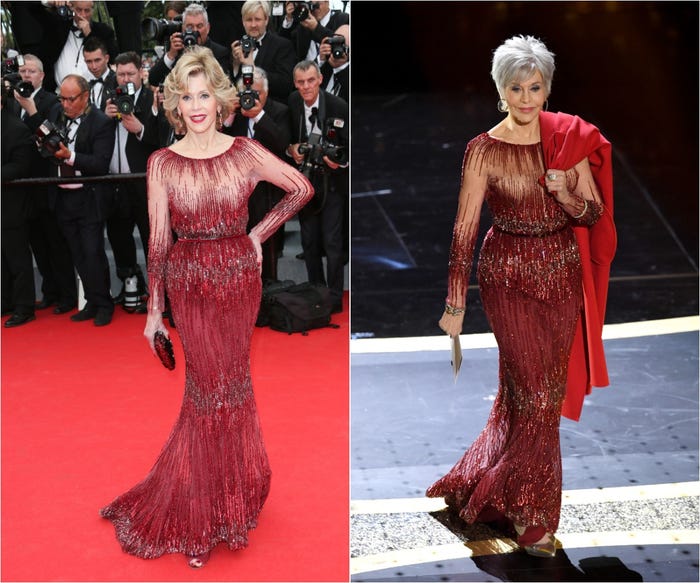 Jane Fonda, Eco Queen and Green Peace activist rewearing a gown from the 2014 Cannes Film Festival to the 2020 Academy Awards.

I’ve personally found that since avoiding fast-fashion retailers, I have not “needed” to replace items as quickly, which means I’ve been able to spend a little more on what I do buy, and look for better quality in items. I know this isn’t an option for everyone, financially or in terms of size inclusivity, but even when it comes to fast-fashion brands, many have been coming out with “sustainable lines”. They include items made from organic linen and recycled materials. Whilst it may still be fast fashion,, this can be a more affordable and accessible choice. You can vote with your wallet by choosing to shop these lines over their generic lines.

I really hope that this blog has helped you to look at the fashion industry in a new light and to make more conscious choice about what you choose to put on your body. If you have any questions of comments, feel free to leave a comment below or to drop me a message using the contact box or through my Instagram.